Home › News › Understanding the Zombie Psych: What goes inside the brain?

Understanding the Zombie Psych: What goes inside the brain?

I have been doing a lot of research on zombies since I  travel to remote locations all over the world. You will be amazed to know that this knowledge of zombie psych has helped me in critical situations. If you are a traveler and outdoor enthusiast then this information could be helpful, though I hope that you are never in a situation that requires zombie knowledge. 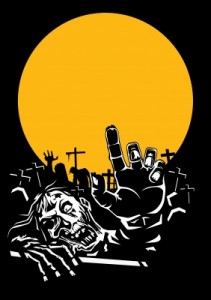 Image courtesy of Kittisak at FreeDigitalPhotos.net

What goes inside the brain?

Understanding the zombie psych, their behavioral patterns, needs, strengths and weakness will help you to combat them. Though there have been many different conclusions on why the zombies feed on human flesh and keep walking even after being dead it still remains a mystery. A practical explanation is that the brain reanimates itself due to some chemical reaction even after all other organs have failed. It could be triggered by some viral or drug reaction. In fact, recently in Texas there have been cases of zombie attacks triggered by drugs.

Here are some of the physical features of the zombies:

• Since the zombies cannot speak they growl and snarl to draw the attention of the other zombies and communicate with them.

• The only need that the zombies have is of feeding on human flesh.

• A zombie cab see you if you are in his line of vision, but gradually they lose their sight.

• Zombies can also smell your presence.

• Their strongest power is their hearing power.

• They move in groups.

• Physically they are just as powerful as they were in their human form, nothing more.

Here are some of the most dangerous types of zombies.

You know children they are all evil underneath the skin. Children zombies are very difficult to locate because they are small in size and fast to move. The good thing is that they are physically less powerful which makes them easy to eliminate. You could use melee weapon to kill these zombies.

Crawling zombies are just as dangerous as the children zombies because they are always on the ground below the eye level. You could be attacked by one without even noticing them.

The zombie psych of the obese ones are to try and crush you under them so that you are helpless. Their disadvantage is also their weight which makes them slow and sluggish.

They are the most dangerous form of zombies that must be eliminated as soon as possible. It is advisable to use a firing or range weapon against them.

Posted in News
In Archive